Traditional scouting experience for youth in the fifth grade through high school.  Service, community engagement and leadership development become increasingly important parts of the program as youth lead their own activities and work their way toward earning scouting's highest rank, Eagle Scout.

Dave Pascoe, Cub Scout Cubmaster
Rob Vaillancourt, Assistant Cubmaster
Michelle Cochrane, Committee Chair
Cub Scouting is fun for the whole family.  In Scouting, boys and girls start with their best right now selves and grow into their very best future selves. It’s fun, hands-on learning and achievement that puts kids in the middle of the action and prepares them for today – and for life.

You love exploring your passions, making new friends, and discovering the world. You’re always looking for an adventure. Rappelling a cliff. Perfecting your shot. Designing a robot. Kayaking into the sunset. Exploring your faith. Volunteering at an animal shelter. The choice is yours! Each activity provides an opportunity to shine and learn more about yourself and the world around you. Venturing is youth-led and youth-inspired. You’ll acquire life skills and gain experiences that will prove to be valuable regardless of where your future takes you, all while having a blast: leadership, event-planning, organization, communication, responsibility – the list goes on!

Former Cubmaster, Robert Vaillancourt, was honored with the District Aware of Merit on April 20, 2017 at the Mahican Annual District Dinner. He was also awarded with the Cubmaster of the year award for the district. The dinner was held to celebrate another year of scouting and the awesome volunteers. Also at the dinner, Troop 1051 received a plaque honoring their 80 years in scouting.​ 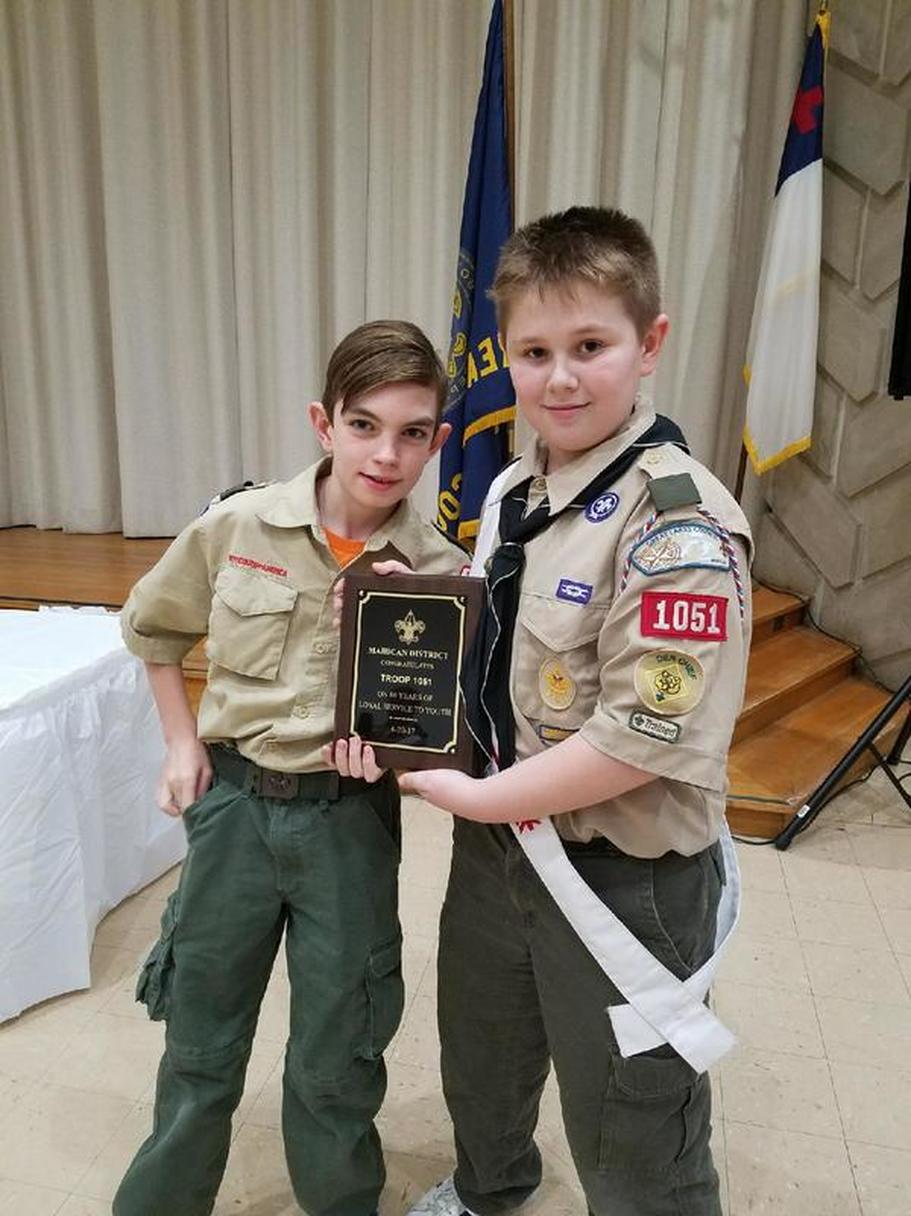 The Boy Scouts of America provides the nation’s foremost youth program of character development and values-based leadership training, which helps young people be “Prepared. For Life.®” The Scouting organization is composed of nearly 2.3 million youth members between the ages of 7 and 21 and approximately 960,000 volunteers in local councils throughout the United States and its territories.
​Value
Scouting provides unique, life-changing experiences youth can’t get anywhere else.
Mission
The mission of the Boy Scouts of America is to prepare young people to make ethical and moral choices over their lifetimes by instilling in them the values of the Scout Oath and Scout Law.
Vision
The Boy Scouts of America will prepare every eligible youth in America to become a responsible, participating citizen and leader who is guided by the Scout Oath and Law. 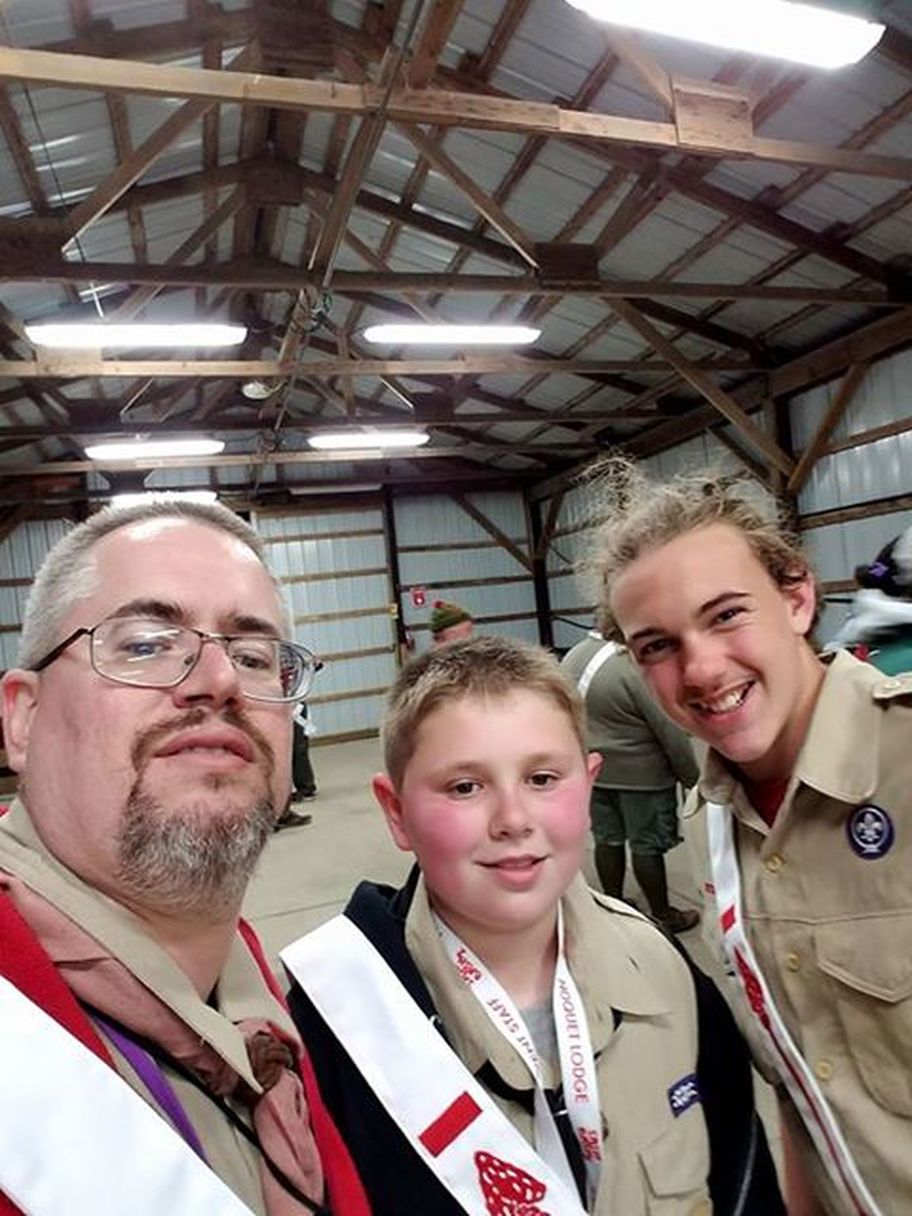 Receiving brotherhood honors in the Order of the Arrow with two scouts.
Scout Oath
On my honor I will do my best
to do my duty to God and my country
and to obey the Scout Law;
to help other people at all times;
to keep myself physically strong,
mentally awake, and morally straight.
Scout Law
A Scout is trustworthy, loyal, helpful, friendly, courteous, kind, obedient, cheerful, thrifty, brave, clean, and reverent.

EAGLE SCOUT PROJECT HELPS SOCIALIZE ADOPTABLE CATS
By SUE SUCHYTA
Sunday Times Newspapers June 16, 2016
DEARBORN – Cat condos created by Eagle Scout candidate Zachary Haas may encourage cats at the Dearborn Animal Shelter to come out of hiding and socialize, increasing their chances of adoption.
Haas, 17, of Lincoln Park, a member of Allen Park Boy Scout Troop 1051, built six cat condos — climbing structures designed to encourage cats to play, exercise and relax — with perches tall enough to let cats survey their environment. The structures increase the likelihood that cats will be out in the open when potential adopters visit the shelter. 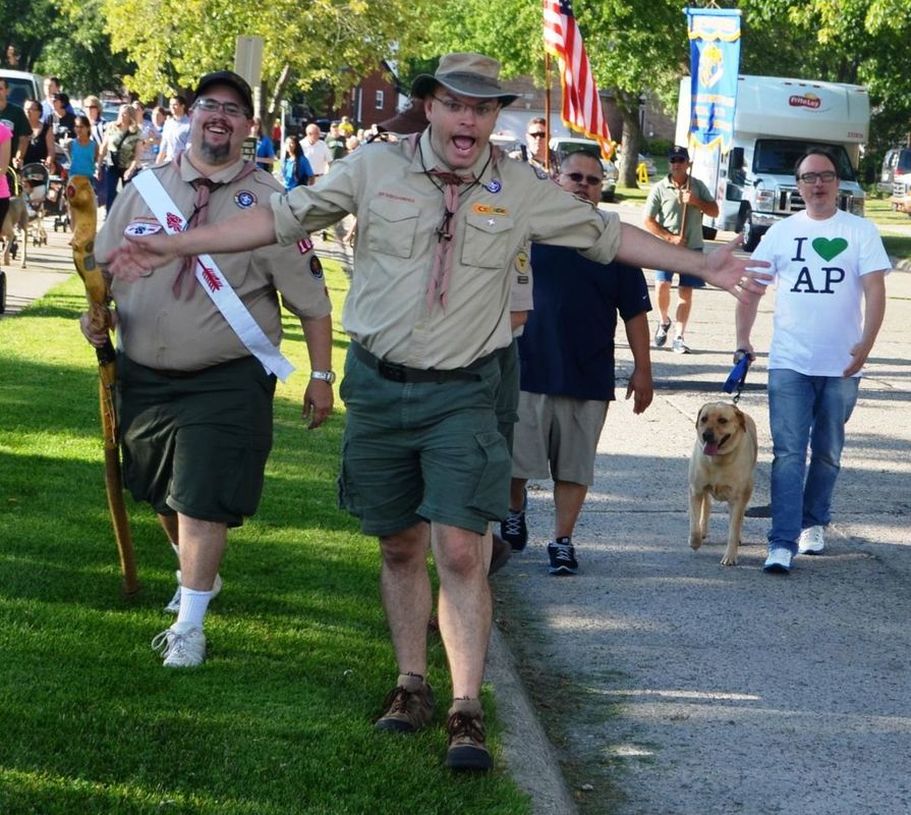 Scouting is fun and it builds lasting friendships!

The camp is about 1700 acres, with three man-made lakes, 28 heated cabins, 11 tent sites, Adirondack shelters, yurts, and a family RV park with full hookups and private bath house. True to the name, it actually has horses, donkeys, and a small herd of long horn steers. In addition to operating as a traditional Scout camp, and working cattle ranch, it also hosts school and church camps, Learning For Life, and many other youth groups. Other unique features include a handicapped accessible nature trail, and a small observatory.

The Boy Scouts of America announced the official theme and logo for the 2017 National Scout Jamboree, a celebration of Scouting held every four years for Scouts, Venturers, volunteers, and staff from across the nation. The 2017 theme, “Live Scouting’s Adventure,” speaks both to Scouting’s century-old tradition of creating adventures that develop young people into the leaders of tomorrow and to the developing adventures of the next century of Scouting.
Since the first jamboree was held in 1937, it has become the BSA’s most iconic event, providing Scouts from all backgrounds, faiths, and cultures an opportunity to gather together and celebrate Scouting and the experiences they will remember throughout their lifetimes. This flagship event showcases the essence of Scouting and the rich tradition of the organization’s values.
​
The jamboree is open to active youth members and adult volunteer leaders in BSA programs and will be held July 19-28, 2017.  To learn more about the 2017 National Scout Jamboree and the Summit Bechtel Family National Scout Reserve, please visit www.bsajamboree.org or https://summit.scouting.org.
A scout camping trip. 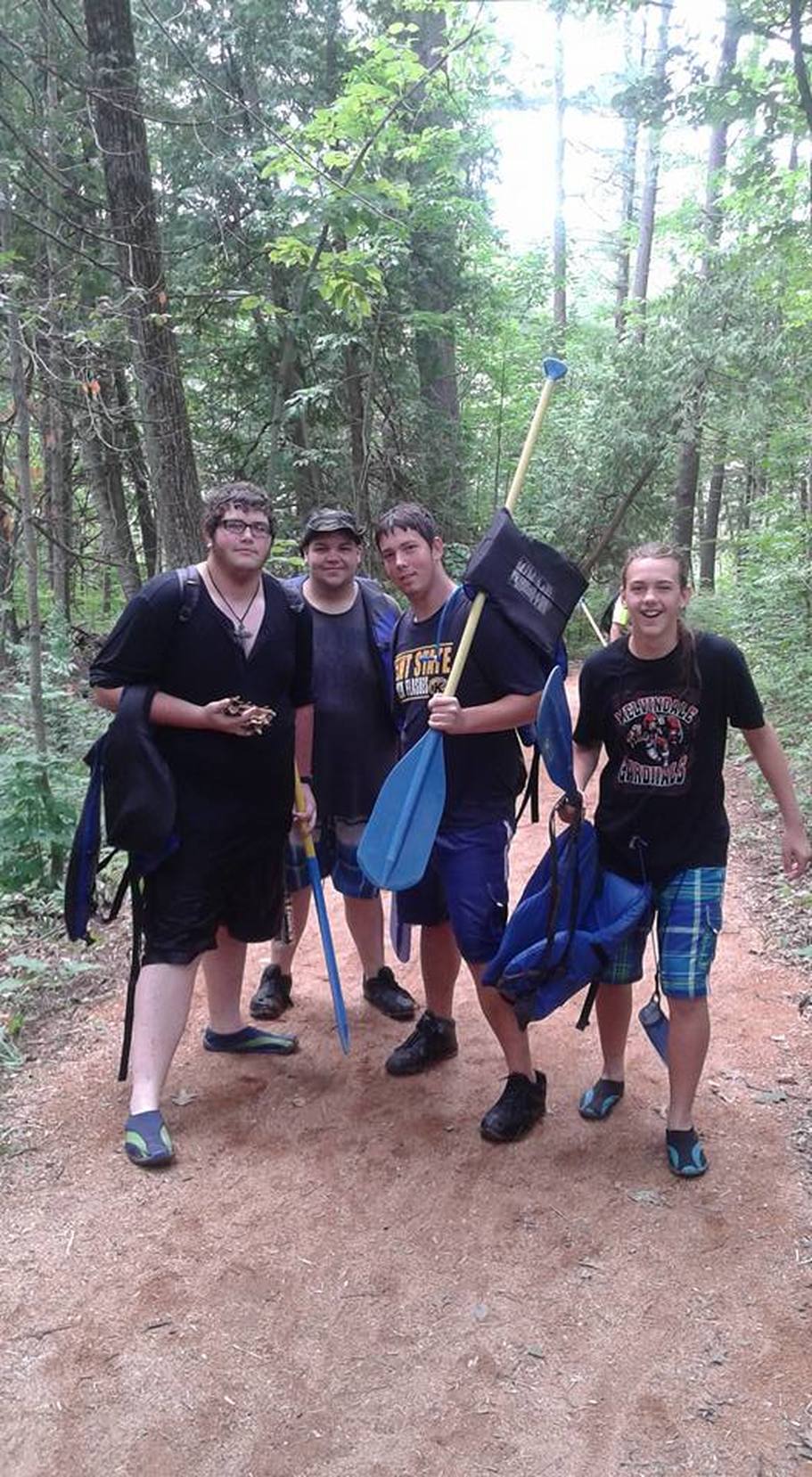 Court of Honor
In addition to recognition ceremonies during troop meetings, a troop holds a court of honor.  This is a formal recognition with families, friends, and the public in attendance. All Scouts who have moved up to any rank except Eagle Scout, or who have earned merit badges since the last court of honor are recognized.

The first recorded history of Boy Scout Troop AP1 (later 1051) was its formation on April 25, 1930 by Everette G. Rutledge.  He served as scoutmaster until 1933.  Others on the committee included C.F. Colling, Floyd B. Norton, Wilford H. Riley, and C.H. Esford.  Rutledge was also one of the first elders of the fledgling Presbyterian Church (1932), was brother-in-law of Allen Park Police Chief Riley, and had previously scoutmastered a troop in Brock, Nebraska in 1916 to 1918.  Rutledge was living in Lynwood, Washington, when he died in 1985.  The troop met in Lapham School which eventually became North Junior High School.  The first scouts included D. Colwell, A. Colwell, V. Collins, C. Collins, P. Chamberlain, W. Hollum, J. Kane, H. Lindeman, G. Lindeman, R. McKenny, L. Reach, and V. Taylor. 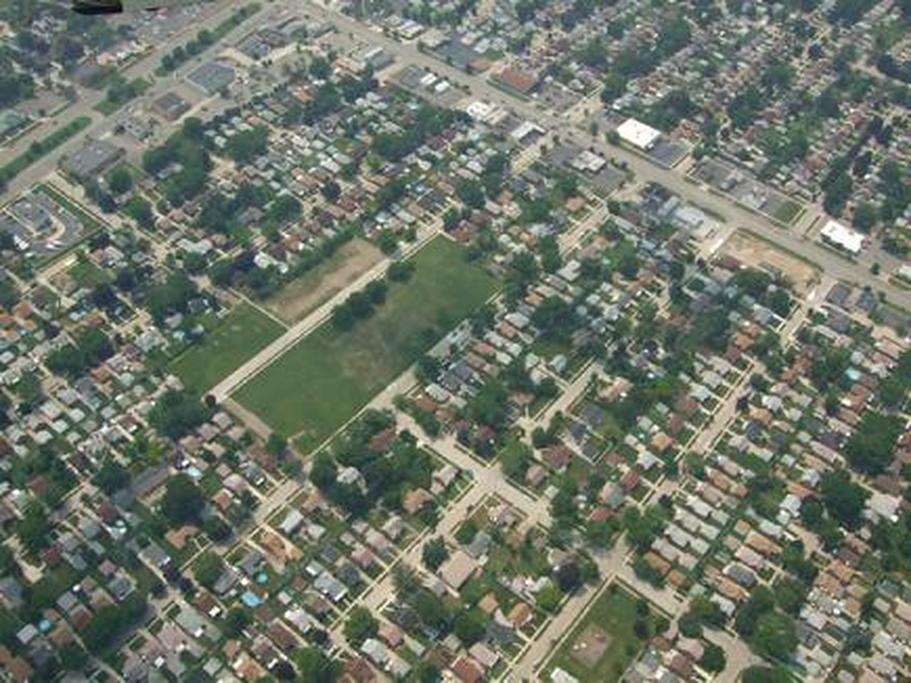 After Rutledge, the troop apparently dissolved until it was revived in 1938, which is generally regarded as the founding year since it has been continuously active ever since.  Soon after, James Shaw led an effort to procure a campground.  They purchased land from Robert L. Moore on May 12, 1941 for $2100.  Jim Shaw and Al Rogers signed the deed.  Genn Dougty, Jim Shaw, Joe Campbell, Al Rogers, Al Carmen, Bill Meikle, and George Fairall signed for a $1400 loan from the Ecorse Band and they are regarded as the founders of the camp.  Also on the scout committee were Normal Alley (A.S.M.), Stanley Fairall (A.S.M.), and A.G. Aldrich.

​The boys and their families worked hard collecting papers and tin cans to raise the money and pay off the loan.  Since scout troops are not allowed to own property, the United Presbyterian Church agreed to hold the property in trust.  Whenever a truck as needed, George Fairall supplied one and the boys originally rode up to camp in the back of ones of these trucks. In 1942, the troop started meeting in the newly-built church, largely under the leadership of “Doc” Carlos Speck.  One of his recruits, Evio Biagini supervised a great deal of the construction.

Early in 1953, the scouts had a contest to name the “Boy Scout Camp.”  A new scout, Carlton Speck (Doc’s son), won with the name Camp Wakanda.  It derives from the name used by the Dakota Indians (which includes the Sioux tribes) for the spirit that resides in all living things.  Other names with the same meaning are Wakan-Tanka, Wakan, or Wakonda.  In 1961, Troop AP1 became Troop 1051. To read more about the camp:  CAMP WAKANDA 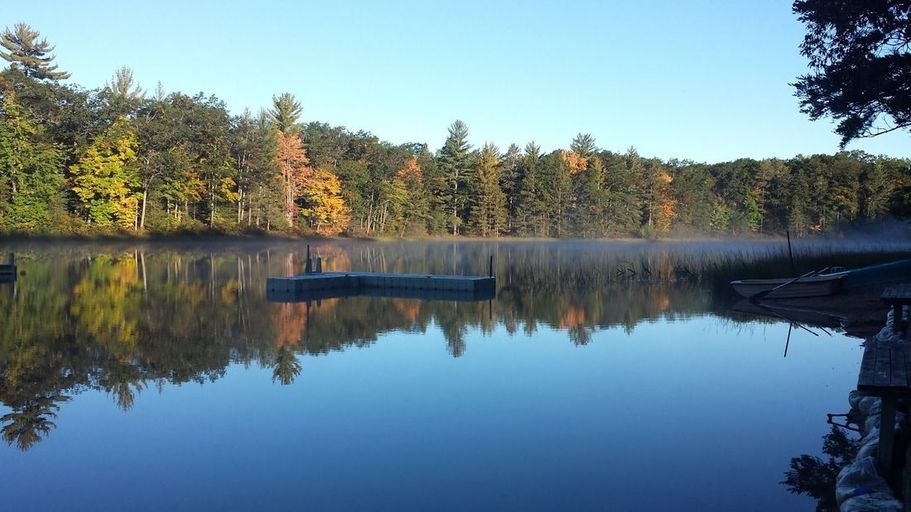 Camp Wakanda - El Lake
In 1970, the charter date slid from October to the following April making it the longest year.  Also in 1970 (Feb. 22) the trust agreement for the ownership of the camp was legally dissolved.  The Presbyterian Church legally assumed full responsibility of the camp because maintenance and improvements to meet the increasingly stringent health and fire codes became too great a burden for the scouts.  Since then the camp has been used every summer for a continuous series of programs involving hundreds of kids, and the scouts of Troop 1051 still go there, and the end of each camp is marked by a Court of Honor rich in Indian lore. 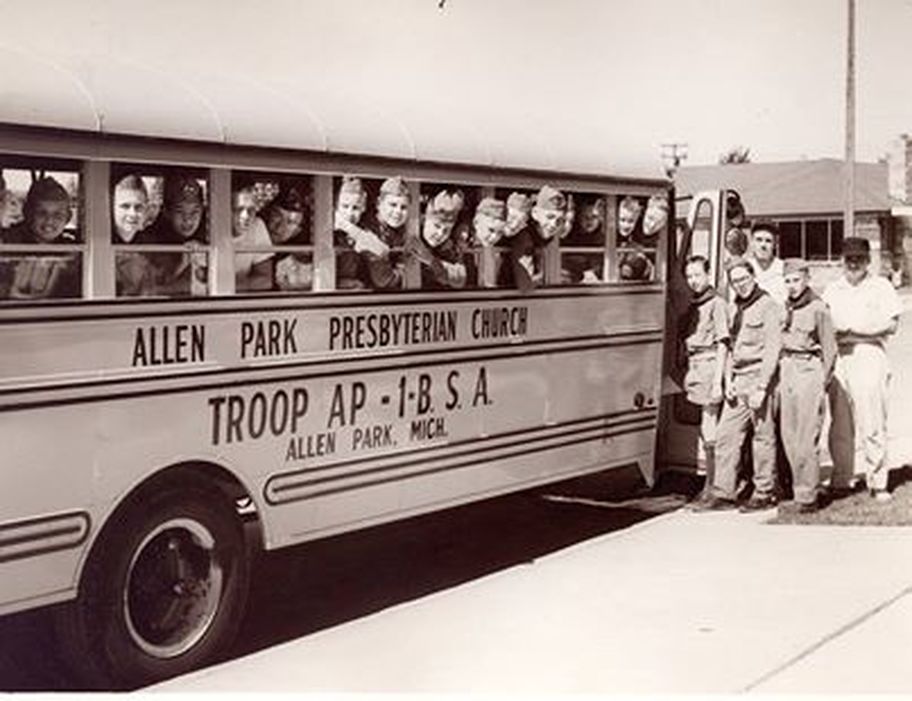